Following the unprecedented success of previous ‘Biggest Disco’ events around the
country, the Biggest 90’s 00’s Disco is coming to Punchestown racecourse on 25th June 2022
Featuring some of the biggest acts of the 1990’s and 00’s, this event guarantees
over ten hours of nostalgic fun.
At three areas – Main stage, Old skool stage and Hip hop stage attendees will relive their youth with live performances from:
Maxi Jazz (Faithless) personal Dj set
Paul Oakenfold / Basshunter / Gala / Charly Lownoise / Vengaboys / 2 Unlimited / Jenny Bergren – Ace of Base / Corona / Niels van Gogh / Klubbheads / Dj 666 / Corona / Phats Small / Kosheen / Captain Jack / Judge Jules / Taucher / Andre Visior / Leeroy Thornhill (ex Prodigy) Dj set / Twenty 4 seven / 2 Brothers on the floor / Dune / Kai Tracid / Kelly Llorena / Damae / Real 2 Real ft. Mad Stuntman / Outhere Brothers / Da Hool / C+C music factory / Special D / Talla 2xlc / DJ Quicksilver / Mauro Picotto / Outhere brothers /
and more…
But that’s not all… The Biggest 90’s 00’s Disco festival is an immersive experience featuring
fancy dress flash mobs, lots of confetti, fire, CO2 jets, drone shows, fireworks and many more special effects and surprises…
This year we are going even bigger! Biggest disco needs biggest stuff! We are building the biggest disco ball in the world and will be lifting it @Biggest 90s-00s disco festival Punchestown! Join us and celebrate with us breaking a world record when we lift and spin it out in front of 15,000 party people! Think the height of a telephone pole or putting one giraffe on top of another and you are close!
This promises to be a spectacular event for people of all ages.
Due to nature of event line up is subject to change.
This event is 18+
Event is subject to license 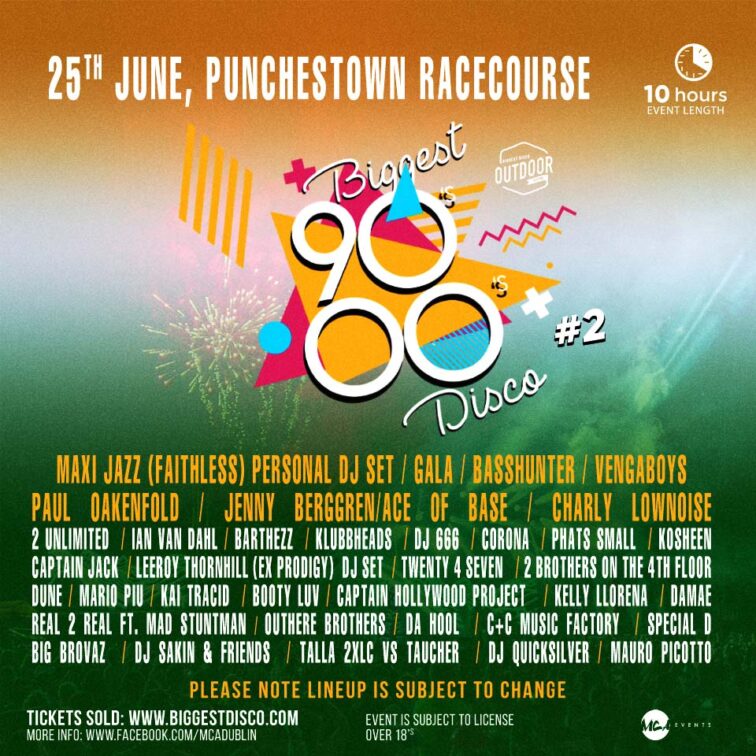