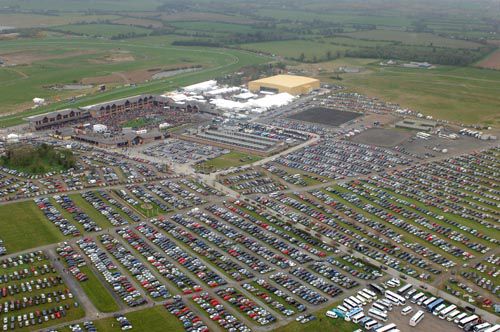 Punchestown Racecourse is located in the parish of Eadestown, between the R410 and R411 regional roads near Naas, County Kildare, in Ireland. It is known as the home of Irish Jumps Racing and plays host to the annual Punchestown Irish National Hunt Festival. The racecourse itself is right-handed with an undulating hurdle and steeplechase track. The hurdle course is one mile six furlongs in distance while the chase course is 2 miles. Punchestown Racecourse also has the only cross country banks course in Ireland.

As well as horse racing, Punchestown has hosted several music events, including the annual Oxegen festival which ran from 2004-2011 and then again in 2013, while AC/DC, Bon Jovi and Eminem are among the artists to have played sold out concerts on the racecourse. In 1982 Rory Gallagher played to over 16,000 people supported by U2, Phil Lynott, and Simple Minds. this was part of Hot Press fifth Anniversary.[1] Dick O’Sullivan has been General Manager since 2003.[2]

Eminem played two dates there in 2003, selling out both. They included his first ever Irish concert on 26 June 2003.[9] He did not return to Ireland again until 2010 when he topped the bill at Oxegen 2010, also held at Punchestown Racecourse.[10]

Australian rock band AC/DC played there on 28 June 2009, in front of 69,354 people. The concert was controversial, with long queues, lack of lighting at exits and too few stewards reported, barriers being pushed over and fans, forced into walking 10 kilometres to the concert, later expressing their rage against organisers MCD Productions for failing to ensure roads were clear.[12]

Westlife lead vocalist Shane Filan played at the racecourse as a solo artist in 2017.