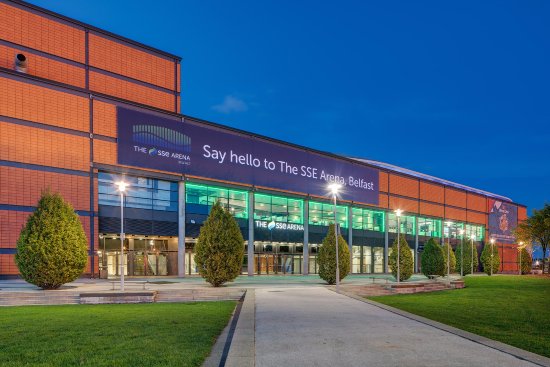 The Odyssey Complex is a sports and entertainment complex located within the Titanic Quarter in Belfast, Northern Ireland.

The complex originated in 1992 and came into fruition in June 1998. It opened in December 2000, with expansions opening in March and May 2001. The complex consists of: a multipurpose arena, science centre and shopping centre. The shopping centre houses a movie theatre and bowling alley, alongside a selection of restaurants.

Formerly the Odyssey Arena from 2000 to 2015. Northern Ireland’s biggest indoor arena, with a capacity of 11,000+ for concerts,[1] hosts concerts and sporting events such as Belfast Giants games. On 25 June 2015, it was announced the Arena would undergo a £3 million refurbishment and become the SSE Arena on 4 September 2015. The naming rights will last for 10 years.[2]

In 2006, the Odyssey Arena was short-listed for ‘International Large Venue of the Year’ (Over 8,000 seats) Outside of North America. This took place at the 17th Annual Pollstar Awards in 2006. This short-listing made the Odyssey Arena one of the top six major concert venues in the world.[6][7]

The SSE Arena, Belfast, has won the ‘App of The Year’ at the 2017 DANI (Digital Advertising Northern Ireland) Awards.

The SSE Arena, Belfast is located in the Titanic Quarter of Belfast, Northern Ireland. If you are visiting the arena, it is a 15-minute walk from the City Centre of Belfast over the Lagan Weir and Queen Elizabeth Bridges.

Visitors are also able to access the SSE Arena in many ways thanks to the services provided by Translink NI. Glider (Belfast) is the newest way to access the arena from the city centre. The Glider Bus route ‘G2’ travels from the city centre to the Odyssey bus stop which allows users to depart right outside of the venue. Metro (Belfast) service ’94’ takes users from Donegall Square North, just outside the Visit Belfast Welcome Centre to the venue with stops immediately outside.

The Titanic Quarter railway station is only a 10-minute walk away from the Arena and Titanic Belfast visitor centre. Exiting the railway station you cross the bypass bridge and turn left on Sydenham Road where the Arena is situated.